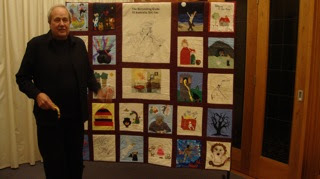 It's a vast country we live in and storytellers are scattered across the continent. There are storytelling Guilds in most States and Territories that serve to support the tellers, in professional practice and in storytelling for pleasure.
The advent of the internet and our skyping skills has encouraged mentoring relationships and skill and resource sharing to a point not previously dreamed of. But sometimes it's good to gather in one place. 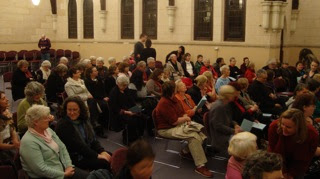 South Australia hosted the 2011 Gathering. A three day event, it began with a Friday night concert of stories. Ruth Carson and Graham Ross invited tellers from around the country to participate. Pictured is Graham standing at the venue in front of the South Australian patchwork banner. Cold weather did not deter our audience who filled the room to capacity. 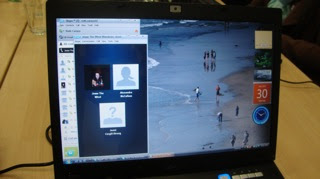 Day two we gathered around a table and with the use of skype continued the national discussion begun several years ago on how to advance storytelling in Australia. You can't see him very well - but that's Jesse the Wind Wanderer beaming in from Western Australia. We also had skypers from Queensland and Northern New South Wales.
Subject to the acceptance of the other Guilds, we 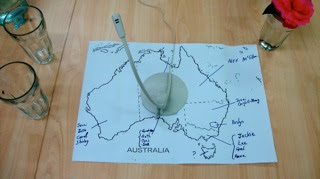 will be known in future as 'Storytelling Australia' and the word 'Guild' will be dropped. Soon we
shall gave a national logo and user friendly website - a gateway to the world that will have links to the member groups around the country.
These discussions were led by Gael Cresp (Victoria) and Shirley Way (Queensland). We thank them for their courage in leading such a feisty group! 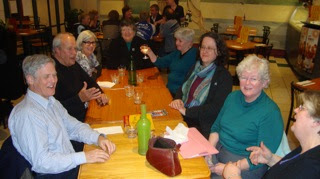 Although looking content at the dinner on Saturday night - appearances can be deceptive - we were exhausted.
Day three was a solid round of workshops. With Book Week in August - and librarians and teachers gearing up for the theme 'One World Many Stories', the focus was on sharing new material and storytelling methodologies.
Pictured is Helen Lawry (South Australia) who 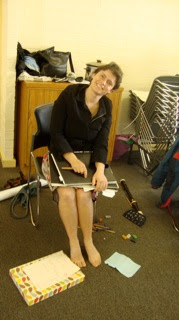 kicked off the day. She taught us three new stories and shared her method of memorising. SImultaneously, Gael Cresp worked with a small group of tellers demonstrating the role of story coach. Helen was followed by Jenni Woodroffe (WA) who explained how retellings of traditional tales had been used as a springboard to bookmaking in a primary school setting. Montgomery Kelly (SA) shared his approach to telling to small children and his new book Out of the Storytellers Hat. This is a wonderful new resource for us all. Finally Jackie Kerin (Vic) introduced her kamishibai and demonstrated how she is using it to spread tales in markets, festivals and schools.
On behalf of the Vic Guild, thank you to South Australia for your hospitality and to all the IT organisers who fought off the gremlins and helped facilitate a brilliant discussion on the the advancement of storytelling in Australia. 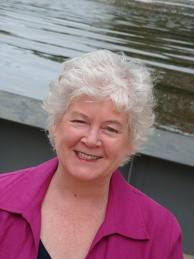 Programs are designed around the needs of the listener.
Bookings: The Storytelling Garden
Ph: 03 9569 6149
Storytelling Coaching
What do you want to know about your storytelling?
After storytelling for over 30 years I realized there were things I needed to know about my performance, specific questions I had about my process and delivery, so I began to look into the literature on developing one ' s storytelling and methods of teaching others how to develop theirs.

My methods are firmly rooted in the needs of the storyteller and I attempt to address the tellers ' direct and expressed wishes.

Individuals or Groups, in person or via Telephone or Skype. Confidential assistance.
Contact: coaching@lantanasystems.com.au
BOOKS 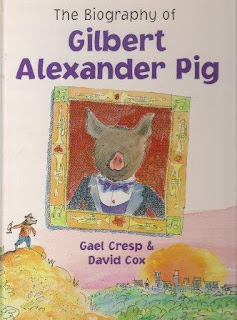 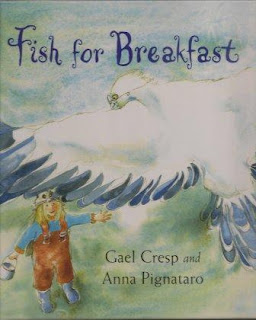 Fish for Breakfast (A Windy Hollow Book, Benchmark, 2002)
$15 each (inc GST and Postage)
To order: sales@lantanasystems.com.au
Posted by Storytelling Australia (Victoria) at 7:40 PM 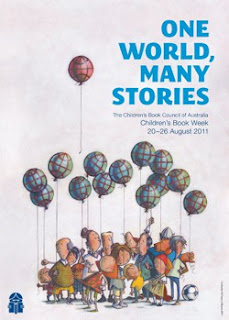 Storytelling Guild Vic has a stable of experienced professional and voluntary storytellers and authors who will visit schools across Victoria. These are Storytellers who specialise in the practice of oral traditions and the links between oral literature and books.
No two Storytellers are the same. It's not too late to book for Book Week.
Learn more about our Storytellers and how to contact them.
Book Week, which celebrated its 65thbirthday in 2010, is the longest running children's festival in Australia.
Each year, many schools and public libraries from all over Australia spend a week celebrating books, Australian authors and illustrators. Classroom teachers, teacher librarians and public librarians develop activities, offer competitions and tell stories relating to a theme to highlight the importance of reading.
Learn more: Children's Book Week
Posted by Storytelling Australia (Victoria) at 7:28 PM 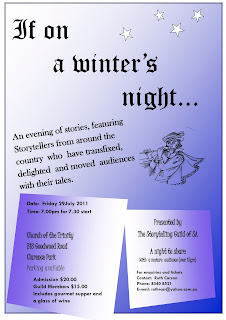 The Storytelling Guild SA is delighted to announce
If on winters night ... An evening of stories that wil transfix, delight and move. Storytellers from around the country are in Adelaide for a one off performance
Where: Church of the Trinity 318 Goodwood Road Clarence Park.
When: Friday 28 July gather some friends and share an evening with a difference.
Cost: $20.00 will get you in, a
gourmet supper and a glass of wine.
Tickets: Ruth 8340 8521 or email ruthrcar52@yahoo.com.au 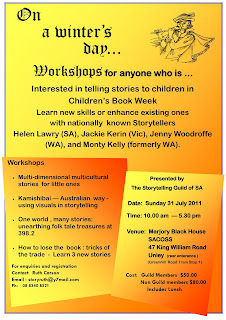 On a winter's day ... Workshops for anyone who is interested in telling to children.
Learn the tricks of the trade and come away with 3 stories to tell, find the hidden treasures at 398.2 in your library, tell multi-dimential, multicultural stories to little ones and experience a Japanese style of storytelling the Australain way.
An opportunity to learn from the best just in time for Children's Book Week preparation.
When: 10am - 5.30pm Sunday July 31
Where: Majory Black House SACOSS 47 King William Road Unley (rear enterance).
Cost: $80.00 ... 4 workshops from experinced and awarded Storytellers, a years membership to The Storytelling Guild of Australia (SA) Inc., lunch and morning and afternoon tea as well as sharing time with people who are passionate about story.
For further information and registration forms:
Ruth 8340 8521 or email ruthrcar52@yahoo.com.au
Posted by Storytelling Australia (Victoria) at 9:28 PM 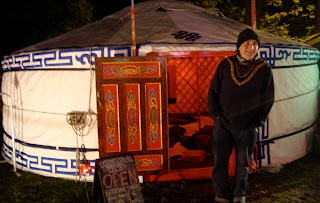 Mentone Public Subscription Library requests the pleasure of your company for the next instalment of An Author for All Seasons.

Our author talk series aims to introduce the Mentone and City of Kingston community with local, published authors in an intimate, friendly setting.

Next in the series is local folk story-teller and musician Matteo, who will be weaving his tales from the great tradition of Grimm’s and the cauldron of his own imagination at the library on Saturday, 30th July 2011 at 11am.

Entry is by gold coin donation. Matteo will be selling and signing his published works on conclusion of his presentation.

Location: Rear of the Community Assistance and Information Bureau,

Posted by Storytelling Australia (Victoria) at 12:28 AM

Posted by Storytelling Australia (Victoria) at 12:08 AM 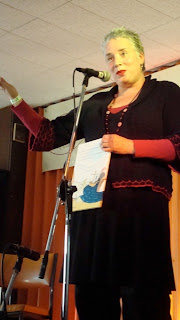 This little festival has gone from strength to strength. Celebrating musicians, visual artists, writers and spoken word.
WORDS is an event dedicated to the wordsmiths in the community and guests, inviting them to step up to the mic and share their creative adventures.
Organised for the Newport Folk Club by Storytelling Vic - this is a mix of poetry, songs, recitation and traditional storytelling.
Pictured here at the mic is Lee Fox sharing with us her newest book for children Ella Kazoo Will Not Go To Sleep (illustrated by Cathy Wilcox). If you are following tales about Kamishibai storytelling in Victoria, Lee is another enthusiast of this style of story making.
Jan (Yarn) Wositzky stepped up with a comic piece. Later that evening Jan performed with the Bushwackers and Bullockies Bush Band in the Newport Substation to finally launch a cd they recorded 37 years ago! The Shearer's Dream. 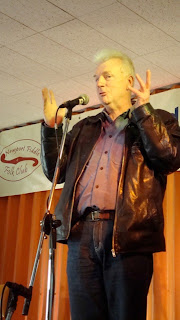 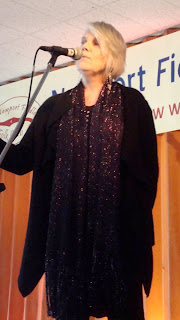 JB Rowley, author and Vic Guild Storyteller told the story of Scheherazade. Scheherazade is the frame story for One Thousand and One Nights. This title is so familiar but few of us have heard the story and JB tells it masterfully.
See more pictures of the Festival and share some of the fun: Newport Folk Festival
Bushwackers and Bullockies: The Shearer's Dream CD and downloads available: here.
Posted by Storytelling Australia (Victoria) at 5:17 PM 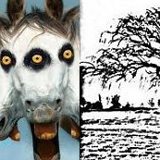 Willow Tales 28th Mar ON THE STAGE
Willow Takes 25th Apr: NOT AS IT SEEMS

We’re looking for stories of the daunting, the spine tingling and the terrifying. Great heights, confined spaces or creepy crawlies. The fear of failure, flying or clowns. Facing your fears or freezing on the spot.

Pre-register your intent to tell by emailing rocketclockss@gmail.com, or register on the night. Everyone is welcome to come along and listen, laugh, drink, cheer & weep.

What is Rocket Clock?

Rocket Clock is a monthly story slam competition. Ten people each have five minutes to tell a story around a particular theme. Judges in the audience rate each story on both content and performance. Everyone has a great time.