Nell Bell is awarded the Leila St John by the Children's Book Council. 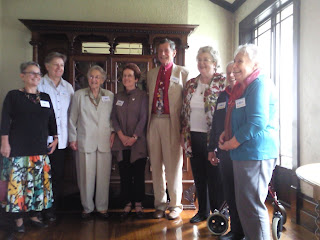 On February 20th, 2011, Nell Bell was accompanied by daughters Susan and Bronwyn and members of the Storytelling Guild of Victoria when she was presented with the Leila St John Medal at Wattle Park Chalet in Surrey Hills.

Nell Bell, life member of the Storytelling Guild of Victoria, was awarded the Leila St John Award in 2005. The award, administered through Children’s Book Council, is awarded for services to children's literature in Victoria. On February 20 all past recipients, who received a paper award, were presented with a medal in keeping with the CBC’s new policy.

Well, according to the reasons outlined on the nomination form, Nell Bell is defined by her generosity of spirit and her love for children, beginning her contribution to children's literature in the 1940s when, as Assistant Matron of Ashfield Foundlings Home in Sydney, she introduced the first story time for 3–5 year olds. This story time became a regular session run by Nell.

Nell's interest in stories led her to further training in that area and in 1975 while working as a librarian at Preston East Technical School she taught Introduction to History of Literature and Books. In the same year she toured schools and libraries in China as part of an education program. After qualifying for her Secondary Teachers Certificate the following year Nell went on to start a Children's Book Club and introduced students to literature via storytelling in the class room. She also published an article—The Importance of Oral Literature—in the Education Department magazine.

By now Nell had realized her passion for oral storytelling and was included in a group of Artists in Education sponsored by the Australian Federal Government and the JF Kennedy Cultural Centre in Washington sent to America in 1988 as representatives of Australia. Nell's focus was the use of oral literature in secondary schools and universities. Back in Australia, Nell conducted seminars in regional universities for mothers of new-born babies on the importance of literature and stories.

Nell was the first storyteller to perform at Dromkeen and has been Artist in Residence introducing students to literature via storytelling at Methodist Ladies College, Richmond Girls High School and Presbyterian Ladies College. She has been a member of the Victorian Branch of the Children's Book Council and the Victorian Committee for UNICEF.

In 1995 Nell took a major role in developing students' skills for performances at St Martins, South Melbourne as part of AEDIS (Artists and Environment designers in Schools). Later that year Nell's storytelling skills won her an invitation to participate in the launch of Children's Week at National Gallery of Victoria.

All of that and more is why Nell Bell is a worthy recipient of the Leila St John Award.

A program for 0-5 year olds with Matteo the storyteller 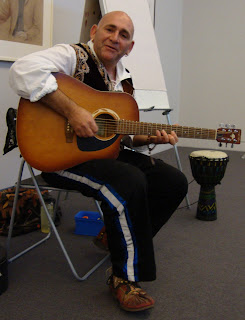 Join Marvellous Matteo for a half hour session of hand clapping, feet stomping storytelling, music and art. Let your imagination run wild! Afterwards, venture through the Gallery with Elisa. 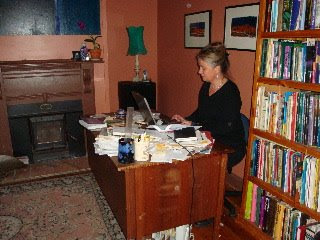 Come in during the next two weeks and become part of my research for a new performance “The Goddess, Saints, Sinners, Bold Women and Me”.( working title)

Inspired by Maurice Saxby’s notion of teaching people to read, this project aims to up-skill the artist; storyteller Anne E Stewart in multimedia and technology. These skills will enable her to bring her work to a wider audience and her new expertise to support community storytelling projects.

With the premise of keeping it simple and inexpensive Anne will work with her own Micro Soft Movie Maker package under the guidance of Erin McCusky of Yum Productions.

Anne will be further inspired by liaising with staff of the Ballarat Arts Academy to see what’s possible. Ongoing contact with ABC’s Marc Eiden will provide further opportunities for Anne to learn and be involved with regional stories. Outside tuition has already commenced with Daylesford's Designscope, who are helping with her new look website.

A major component of the project will be to develop a digital story around her original “Eureka Runaways” love story. Paintings, maps and artefacts from the Ballarat Art Gallery collection will further illustrate the story, alongside Anne’s appearance and narration.

Running concurrently will be two installations.

1. Over two weeks Anne will bring artefacts, art works, storytelling props and photos to display that tell the story. Titled “The Way of the Storyteller” each day the new items will be photographed and cumulate in words text and images that illustrate her storytelling life.

2. The second installation is about creating a new show for performance; “The Goddess, Saints, Sinners, Bold Women and Me”.( working title)

Invited artists, friends and family will be asked to contribute names words, illustrations, artefacts to celebrate women and tell their stories. Once again this will be photographed a narration recorded and edited for display online and by way of projection.

A launch of the stories will happen at the end of the residency. 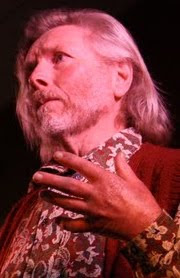 The 2011 Performing And Visual arts in Emerald (PAVE) Festival will kick off on Wednesday evening 6th April. This is the calendar event not to be missed in the Dandenong Ranges. This is one of the most significant arts festivals within the hills and Emerald's biggest event for the year. It always offers activities for every age, taste and interest and this year is no exception.
Stories Plus @ The Gem Theatre
Saturday 09/04/2011 3:00 pm - 5:00 pm
A new event for PAVE aimed at people 5 years to 500 years. An intriguing mix of storytelling complimented with cartooning, harp, music, song, origami and dance. Family entertainment with a new twist.
Featuring Vic Guild Storyteller JJ Sheills, Origami Specialist Brenda Saunders, Cartoonist Paul Harris, Celtic Harpist Cath Connelly and more. Adults $12, Children $8, Family $30 (2 adults & up to 3 children or 1 adult and up to 5 children)

The Ballarat Storytellers at the Community Garden: 18 February 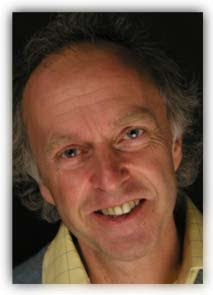 Master storyteller, Ashley Ramsden, from the International School of Storytelling in the UK, is coming through Melbourne again from 12-18 April. For those of you who have worked with him before, you'll know he is a wonderful workshop leader with a great capacity to inspire, encourage and innovate. I always come away from a session with Ashley with ideas for storytelling, teaching, facilitating and, well, just living more playfully.

All workshops: MIECAT studios in Fitzroy.

Flyer and registration form with all the details and the information is available on EVENTS.

Give me a call or send me an email if you want to know more!